Don’t confuse this antique ‘zhadou’ with your common spittoon

Craftsman Sam Forrest’s best description might come from signage in the new exhibit, “Atavitic Memories: The Studio Furniture of Sam Forrest,” currently at the Branch Museum of Architecture and Design. Forrest is described as “a man committed to the delight and dilemma of wood resistance”.

Handcrafted with limited machinery, his creations are as much sculpture as furniture, expertly combining beauty and functionality. His striking furniture synthesizes organic and geometric themes while breaking conventional rules and introducing eccentric and contrasting forms. An enlarged black and white photograph of Forrest, tool in hand, working in his studio alludes to the focus and passion the artist brought to his beautiful work (see below).

Forrest was a native of Mathews County, Virginia who attended the Richmond Professional Institute (soon to become VCU) in the late 1960s. He made his home and studio in Church Hill before moving to the neighborhood of Carver, as did other RPI artists such as sculptor Myron Helfgott. Forrest eventually abandoned Carver for Louisa County before returning to Mathews and living at Hyco House, which he soon renamed Haiku House due to his lifelong interest in Buddhism.

The Inspiration for the Branch exhibition followed in the wake of Forrest’s death in May 2021. Although he was prolific, his work was underappreciated during his lifetime for its place in the American Studio Furniture movement. The aim of the exhibition was to place his work in this context.

Beginning in the 1920s with Wharton Esherick, woodworkers moved away from mass-producing furniture, choosing instead to focus on natural materials while working in their own studios. Among the followers were Wendell Castle, who pioneered pile layering techniques that allowed for more sculptural yet still functional works, and his student, Alan Lazarus, who taught Forrest.

To capture Forrest’s more than fifty years of craftsmanship in wood, the Branch Museum has assembled 38 pieces from family, friends, collectors and Sam’s last home, the Haiku House, in Mathews. , as well as portraits of William P. Kendrick. , Erjun Zhao and Catherine Venable. Kendrick’s expressive oil painting, “Angry Young Sam” from 1963, offers a window into the intensity of a man most of us have never known.

Luckily for the viewer, many who knew Forrest were interviewed to share their memories of the exhibit. Among those who did were: friend and sculptor Ruben Peacock; mentor and notable furniture maker Alan Lazarus; friend and painter Catherine Venable; friend Zarina Fazaldin; his friends Lloyd and Art Backstrom, who own many of his pieces; Tabitha and Joe Ramseyer, who worked with Forrest at his last studio in Mathews, Virginia and currently manage his last home, the Haiku House; and the craftsman’s son, Bo Forrest.

Between groups, they were able to help branch staff develop a timeline of Forrest’s career and life and understand the various influences on his work. Many pieces in the exhibition were chosen from the works he left to his son Bo.

“Sam created work in three somewhat distinct periods that we were able to identify,” explains Sharon Aponte, Executive Director of the Branch. The museum has also researched and identified works by other local people made during these earlier periods. “We had hoped to identify more works from the 1970s further down the road, but time did not allow them to come here. In addition to the date, we have selected works in order to represent the different forms, materials and techniques used by Sam. » 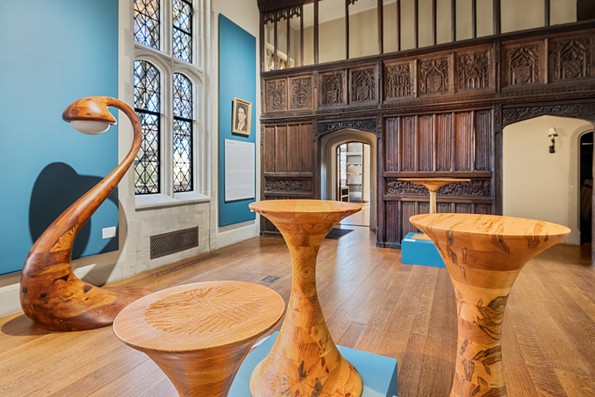 Moving through the exhibit reveals one sculptural delight after another and a masterful use of negative space throughout the pieces. There’s the “Sex Dragon Table” with its undulating supports piercing openings in the top of the table. The ‘chess table’ is utterly unique, its square top resting askew on a base that appears to rotate, while the attached chessboard is carved at an angle across the table, just breathtaking enough to drive any kind of fanatic crazy. serious failures. . “Leaf Table – Schubert’s Unfinished Symphony 2019” was Forrest’s last piece, left incomplete when he died. A round pedestal table is displayed upside down so visitors can see Forrest’s signature – a scalloped-edge flower-like design created by a series of smooth grooves cut from side to side – on the underside of Table.

A Virginia-centric path is precisely what led Forrest to his first solo exhibition.

“The Branch Museum of Architecture and Design is a design museum, and the American Studio Furniture movement is an important design tradition,” notes Aponte. “Based in Richmond, it’s important to us to showcase the work of regional designers wherever possible.

For those of us who didn’t know Forrest, the new solo show makes us feel like we loved it.

And for those interested in learning more about the American Studio Furniture movement, the Branch Museum will host an in-person panel discussion on March 24 with panelists Alan Lazarus, furniture maker and founder of VCU’s woodworking program; Holly Gore, director of interpretation and research at the Wharton Esherick Museum; and Scott Braun, assistant professor of wood in the VCU Department of Crafts and Materials Studies.

“Atavitic Memories: The Studio Furniture of Sam Forrest” runs through April 17 at the Branch Museum of Architecture and Design, 2501 Monument Avenue. Branchmuseum.org

Saw Filing 101: Filing rooms onsite, offsite or something in between?

The role of government in protecting citizens from illegal online lending

5 tips to save money when buying your first home